What is Post-Production? A Quick Rundown & Why Trust Matters

Home / Blogs / What is Post-Production? A Quick Rundown & Why Trust Matters

There are a ton of professionals involved in Post-Production, and trusting each other probably matters more in ‘post’ than any other time in the filmmaking process. These are the final steps and they’re the glue that holds the movie together, literally. So, what is Post-Production, who’s involved, and what should you consider before it begins? Let’s take a look.

The Post-Production process involves a slew of professionals — editors, sound engineers, foley artists, colorists, and more. There are some standard practices that are universal across television, features, and other visual mediums.

But of course, it is important to note that depending on the size of the project, its budget, and which arena you’re in (television, film, or even video games), the Post-Production process will vary.

We’ll briefly define Post-Production, and get into the stages that are generally part of the process, as they relate mostly to film.

Post-Production is the stage after production when the filming is wrapped and the editing of the visual and audio materials begins.

Post-Production refers to all of the tasks associated with cutting raw footage, assembling that footage, adding music, dubbing, sound effects, just to name a few.

The Post-Production process is highly collaborative, across a few months to even a year, depending on the size and need of the project. 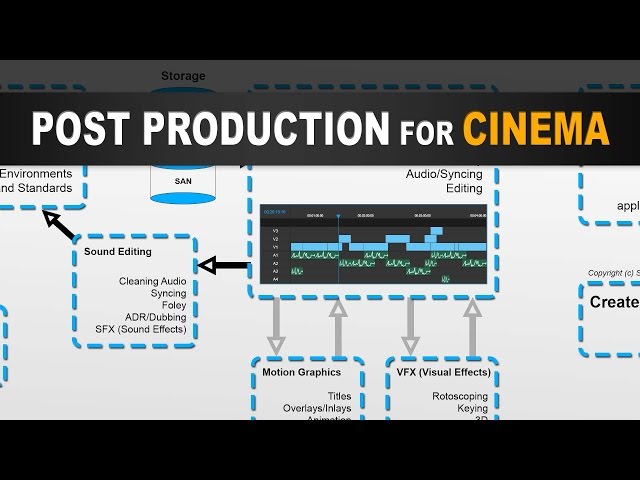 And now let’s jump into some of those workflow details.

Once the film is shot and production is wrapped, you can finally go to bed! Just kidding. It’s Post-Production time. Whether you’re a director, producer, or editor, you’ll be involved in at least a few stages of this process. And there are quite a few stages. Let’s get into it.

Is Your Footage Secure?

Once you’re done shooting, before you do anything, and I mean anything, make sure you have reliable storage — a secure place to house all the footage you just spent hours shooting.

It can be anything from a basic hard drive to spinning hard drives, or even RAIDs (a combination of hard drives).

RAID can be installed in your computer or it can be external. It’s usually used by editors handling a lot of footage because it increases the performance and reliability of standard data storage.

Before you accept a job, or before you hire an editor, make sure safe and secure storage is in place.

STAGE ONE IN POST-PRODUCTION

It begins with picture editing

Which brings us to the next most important point of them all — the editing process, more specifically, picture editing (we’ll get to sound editing soon).

Your cinematographer might have some suggestions, but make sure before you hire an editor, you’re already familiar with their work.

Now the editing process can begin.

After your editor reads the script and look at the dailies (or rushes) from the footage shot that day, they can start working their magic. They’ll likely make an Edit Decision List (EDL), cutting the film how they believe is most advantageous to the story.

This is a pretty big responsibility, so make sure whoever you hire understands the tone and feel of the film ahead of time, but don’t be afraid to let them use the skills you hired them for — striking that balance will be key to telling a great visual story. Editing software like Adobe Premiere, Avid, and Final Cut Pro, are recommended.

Assembling footage takes time — it could take anywhere from a month and a half to several months. The first draft of the film is called a Rough Cut, and the final version will be called the Answer Print. When the director is happy with the visuals, they’ll “lock the picture,” and the sound editing can begin.

Next up: creating sound

Once the picture is locked, it’s time for sound editing. Hire the best sound editors because a ton of work is involved. They’re responsible for assembling the audio tracks of your film, cutting dialogue tracks, removing unwanted noise, and even enhancing your movie with sound effects. The specific sound needs for that particular project will dictate who to hire.

Sound effects are often the job of a foley artist. When the pre-recorded sound from set doesn’t well, sound so good, Foley artists come in and recreate the sound.

They watch the movie in a studio and it’s most common for them to recreate the sound of footsteps by walking on tile floors or sometimes wearing certain types of shoes to get certain sounds. They come up with clever ways to make doors slam, and bones break. 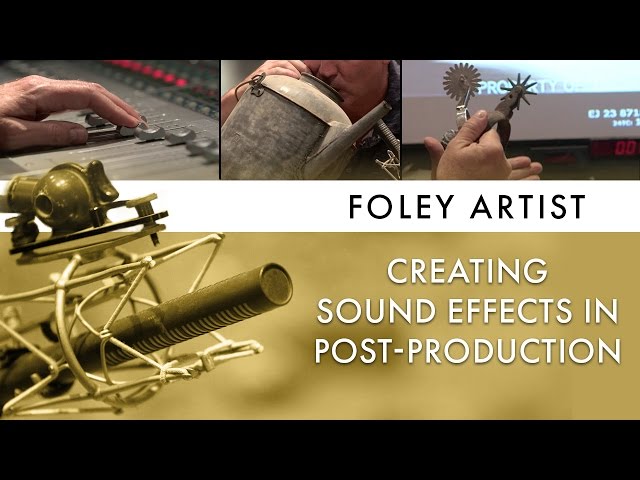 When actors come back into the studio and re-record dialogue over the scene, it’s called ADR, or Automated Dialog Replacement. Sound engineers and sound editors do this when the sound wasn’t captured well enough on set.

But sometimes it is done for creative purposes. This is also good for scenes that require voiceovers or any other dialogue off-screen. And in animated films, of course, ADR takes up most of the “filming.”