RAJASTHAN FOLK DANCE: FAMOUS FOR ITS TRADITION AND RICH CULTURE

Rajasthan has many forms of folk dances that are attractive, skillful and somewhat enjoyable for any age group. The folk dances of Rajasthan are popular all over the world. This article explores 5 types of dance traditionally found in this region of India.
Some of the traditional dance forms of Rajasthan are very different, since only trained people can do it. The Ghoomar dance of Udaipur and the Kalbeliya dance of Jaisalmer have gained international recognition. They are examples of traditional Rajasthani culture, if you want to visit Udaipur to watch their beautiful culture than “Royal Adventure Tours” offers a great range Udaipur Tour Packages.

This is basically a community dance for women and is performed on auspicious occasions. The famous ‘ghoomar’, Rajasthan’s popular dance gets its name from ‘ghoomna’, the graceful twist, which shows the spectacular colors of the flowing ‘ghaghra’, the long skirt of the women of Rajasthani. Ghoomar is often performed on special occasions, such as weddings, festivals and religious occasions. You can enjoy these performances with Royal Adventure Tours groups in Jaipur with their Jaipur Tour Packages, they provide you with a full enjoyable environment at a variety of prices.

​This folk dance is performed by the Kamada tribes who are the traditional snake charmers. It is also practiced by Pokhran and Deedwana, to honor their popular hero, Baba Ramdeo, which consists of women sitting on the ground before their image. The dancers perform several arabesques with their hands and at the same time they can also balance pots in their hands and hold a sword in their mouth, to make the performance more attractive. The dance begins with the women, who sit on the floor and their body parts are tied with manjeeras.

This is one of the few performances where men and women dance together. This folk dance is performed in a series of half swirl, as a simplistic version. It can also be developed according to a series of complex patterns according to the capacity of the dancers. Some of its variations are Dandi Gair which is located in Marwar and Geendad, in the Sehkhawati region of Rajasthan. Men dance in a large circle with wooden stick in their hands. The Gair dance of Rajasthan is performed by groups of dancers moving in and out of a large circle. The men beat their sticks to create the rhythm when they turn. 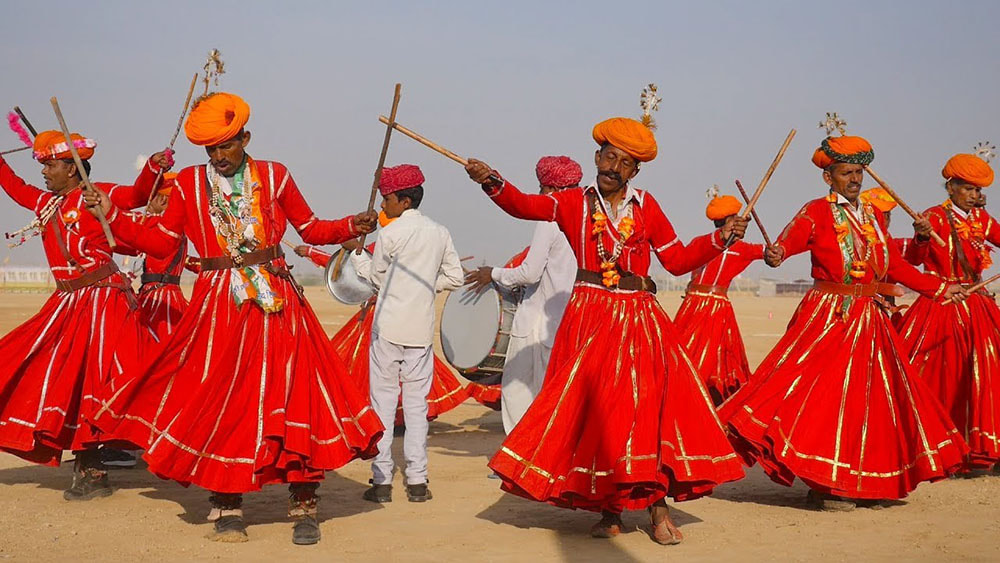