Born to a farmer family in Uttar Pradesh, his parents wanted him to secure a stable job which would ensure a regular monthly income. One of nine siblings, Siddiqui completed his graduation in chemistry from the Gurukul Kangri University in Haridwar, following which he moved to Vadodara in Gujarat and worked as the chief chemist at a petrochemical factory for a year-and-a-half. The monotony, though, got to him and soon he was “bored of that job”. The only thrill in his life at the time was his occasional participation in Gujarati plays organised by the drama department at Vadodara’s MS University. (He pushed himself despite his lack of familiarity with the language.) The turning point was when he saw the play Thank You Mr. Glad. That experience sowed the seeds of the actor in him. “I was inspired by the amazing chemistry between the actors and the crowd after watching that show. And I decided to pursue theatre seriously.”

A friend suggested that he move to Delhi and study at the National School of Drama (NSD) since Vadodara only staged Gujarati plays. But it was easier said than done. Siddiqui failed to get admission. However, he did not leave the capital. Instead, he worked as a watchman in the city for nearly two years, earning a measly sum of Rs 600-700 a month to make ends meet. “I had to pay Rs 5,000 as deposit to get the job [of a watchman]. I mortgaged my mother’s gold jewellery in Uttar Pradesh to get that money, thinking that I’d repay the amount from my salary,” recalls Siddiqui. The financial hardships, however, did not deter him from pursuing what was slowly becoming an unquenchable passion—acting. He enrolled himself with an amateur theatre group in the capital, rehearsed for plays in the evenings and acted on stage in the mornings while diligently doing night shifts as a watchman.

Eventually, Siddiqui did crack the competitive NSD entrance exam and graduated from the institution in 1996. His stint there exposed him to a variety of Western drama and literature, and gave him a strong foundation in acting. “After joining NSD, I realised what one must not do in acting. That is also important. Till then, we thought changing one’s physicality or being loud was acting,” says Siddiqui. NSD, he adds, “taught everything lavishly”; it also opened a window to new worlds, for instance the Stanislavski school of method acting apart from opportunities to act in plays as diverse as Shakespearean comedies and those by Anton Chekhov. “Theatre explores all the traits of your personality. It has many forms and there’s experimentation involved. You become rich as an actor,” says Siddiqui. “Theatre belongs to an actor; films are a director’s medium.”

This explains why Bollywood as well as regional cinema in India have been blessed with several actors and directors who emerged from theatre: From Naseeruddin Shah, Om Puri and Pankaj Kapur to Irrfan Khan and Manoj Bajpayee. It is impossible to leave Siddiqui out of that list today. In fact, it wouldn’t be far-fetched to suggest that his popularity rivals that of any ‘mainstream’ talent. 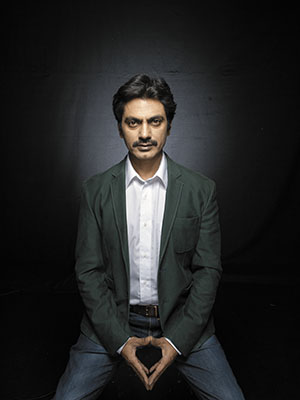 But even though he underrated his own chances, there were others who noticed the spark in him, even in those blink-and-miss appearances. Director Dibakar Banerjee was one of them. “I wanted to cast Nawaz in a film since I saw him in Black Friday. He had a small role in the film, but he stood out. I was actually impressed when I saw him in Ek Chalis… and wanted him to play the character of Bangali in my film, Oye Lucky! Lucky Oye! (2008). But I did not know his name then. I only knew him as the guy in Black Friday and was unable to figure out who he was,” says Banerjee, whose films Khosla Ka Ghosla (2006) and Oye Lucky! Lucky Oye! have both won National Awards. The two went on to work together in Bombay Talkies (2013) in which Siddiqui plays a failed actor who struggles to make a living after his father’s death. “It’s my favourite, among all the roles I have enacted so far,” says Siddiqui.

Actor Manoj Bajpayee, who co-starred with Siddiqui in Gangs of Wasseypur–Part I (2012), echoes Banerjee’s views. “I always foresaw Nawaz becoming an actor of repute. I knew that the day he got a meaty role, he would succeed. That’s the best part about him… he was ready for the big thing,” says Bajpayee, who also played the lead in one of Siddiqui’s first plays, Uljhan, in which the latter was a tree and stood quiet for two hours with his arms stretched upwards.

The appreciation and laurels began pouring in for Siddiqui from across the globe too, with his films making it to international festivals. At the Cannes Film Festival, six of his movies were screened in two years—Miss Lovely, Gangs of Wasseypur and Gangs of Wasseypur – Part 2 in 2012 and The Lunchbox, Bombay Talkies and Monsoon Shootout in 2013—a worthy achievement for any actor. It was a fulfilling journey for someone who would travel 45 kilometres from his home by bus to watch C-grade movies of Kanti Shah and Joginder in a theatre in Muzaffarnagar by paying Re 1 or Rs 2 for the ticket. For many people in the industry, though, it was still hard to place the ‘outsider’ as an ‘actor-hero’. When Siddiqui approached a fashion designer to style a suit for him for his appearance at Cannes, he flatly refused. “He probably did not believe that even my films could go to Cannes,” says the actor. Siddiqui then got a new suit stitched by a local tailor. The second time round, he says, a host of designers approached him, but he decided to wear an old suit instead.
Such experiences may have left him bitter, but they also helped the shy and reticent Siddiqui evolve as an actor. His leading lady in Manjhi—The Mountain Man, Radhika Apte, says: “The way he’s come up in life… that changes what work means to you after a point. Nawaz has seen sudden fame and adulation, but that has not changed his dedication to work. He takes his work very seriously. He does not like to take the limelight and wants to ensure that the entire thing works. People generally run after fame and money. Not him. His simplicity is his asset.”
To read more, click here.