Mata ni Pachedi means “behind the Mother Goddess” in Gujarati. Pachedi is a religious textile folk art derived from the Kalamkari style of painting, featuring the Mother Goddess at the centre and her stories, the remaining cloth is then filled with images of devotees along with flora and fauna.

The art, said to be over 300 years old, is so unique to this region that the government has already applied for according the Geographical Indication (GI) tag for Mata ni Pachedi textile art form. The origin of this art form is said to be linked to the geopolitical history of Gujarat, which has been one of the key parts from where foreign rulers had traditionally invaded India over the centuries. As the raids also led sometimes to destruction of temples, the nomadic community thought of a way to keep their beliefs intact and prevent invading forces from committing sacrilege by transferring the idols of their gods and goddesses on to a fabric which was easier to save from desecration.

Thus, the story goes, the Vagharis made their own art depicting scores of goddesses and their legends, into moveable temples. Centuries later, while the invasions have ended, the art form has survived. Belonging to the Vaghari community, Kiran Chitara is an eighth-generation artist based in Vasana in Gujarat.  He says that his whole family has traditionally been practicing Mata ni Pachedi art. He says that since childhood, he has been helping his father in filling up colours on the textile and to go with him to the river to wash the fabrics. Chitara says that over the years, he and his siblings began learning this art from their father. Years later, Chitara has mastered the art to an extent that has been decorated with a national award by the Indian government for excellence in the art form. 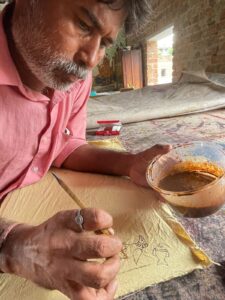 “My father was a paralysed, so I and my brother always used to help him. We began by filling up colours in the design but graduated to doing everything on our own,” Chitara who has been practicing Mata ni Pachedi art for almost 35 years, tells Media India Group.

But Chitara is not content with him winning the national award. He says he has taken enough steps to ensure that his son, Om, also follows in his footsteps, in order to keep the art alive and continues to pass on from one generation to another as it has done for the past several centuries.

“Since my childhood I have seen my family doing Mata ni Pachedi art, and our own house is filled up with these art pieces. I also wanted to carry on this noble art and wanted to create a new dimension to make it a little unique. We have no other work apart from this,” says Om Chitara who has now become the ninth-generation artist in his family.

The art created by the Chitara family finds adorn the places of worship during festivals and they say it helps to communicate vital cultural heritage to worshippers.

Creating a Mata ni Pachedi is a complex and delicate task, which involves painting mythology stories and usually depicts manifestation of goddesses.

Cotton cloth is the canvas of this art. The cloth is first freed of any starch by soaking it in water for 24 hours and then sun dry it. The dried, starch-free cloth is again soaked in the solution of harda (Terminalia Chebula) and again left under the sun for drying. It takes two full days to prepare the canvas.

To make Mata ni Pachedi art, the artists say they follow a step-by-step process. After the canvas is ready, an outline of the creation is drawn on it in black colour, which is a natural, home-made colour, like all other colours used in the art. The artists say they keep a mixture of jaggery, iron rust along with water in a completely covered pot for almost 15 days to obtain the natural black colour. Subsequently, they add tamarind seed paste to make different colours. 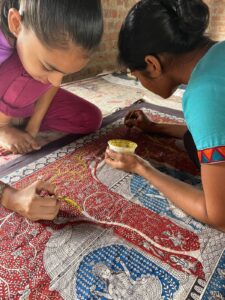 Mata ni Pachedi is painted using Kalamkari techniques. Bamboo sticks are sharpened to draw the outline and they also act as a painting brush to paint different colours on the fabric.

“We draw the image of Mother Goddess as framed in a shrine or temple in the centre and imagery symbolising her worshippers, then its outlined using kalam,” says Chitara.

This art involves freehand drawing. The canvas is painted with dye colour made from a solution which has alum and iron mixed and it appears to be yellow because a non-permanent dye is mixed in to make it visible during the application.

Chitara explains that, the major reason to use natural dyes as a paint, is to keep this art everlasting. “Mata ni Pachedi textile art can be seen in several temples of Gujarat, most of that were very old but still it remains as a new piece because of the natural dyes used in it. But if we use chemical colours, they will fade away soon,” Chitara tells Media India Group.

Chitara says that each colour has its own significance. While black indicates the evil eye, maroon indicates the colour of Mother Earth as well as blood which is sacred feature during worship of Mother Goddess, and white indicates the purity.

“After filling up the colours, the painted fabric is washed off in running water, to remove the dust and unwanted colours. Even sometimes due to chemicals mixed in the river water, the whole piece ruins and the colour spreads out all over. The major problem is we don’t get adequate facilities to make this art,” says Chitara. 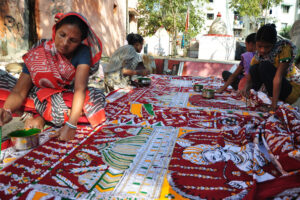 Once the painted fabric is washed then it is boiled in water, adding Dhawda flowers and alizarin solution to bring out the colours and to fix the dyes. After this, the final piece is sundried.

“The uniqueness of this art and because it is our own ancient traditional art and dedicated to goddess, it takes days of patience and dedication, to make one piece of art. Nowadays, some artists have introduced many more colours due to market demands,” says Om Chitara.

The artists say that even though they have been tyring to keep the art as traditional as it has been over the centuries, the current market conditions and a decline in the number of buyers has forced some of them to use the wooden block printing, which is easier to make and cheaper for the buyer.

“Wooden block designs are cheaper compared to hand designs, which start from INR 500 to above INR 1,00,000. The price depends on the size of the art,” says Chitara. 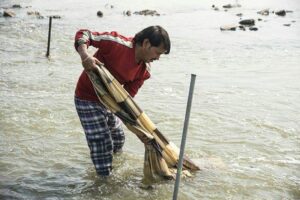 Painted fabric is washed off in running water, to remove the dust and unwanted colours (Photo: Om Chitara)

Mata ni pachedi textile art is revered by all and used in many places, because of its sacred nature it is often referred to as sacred cloth. It is used as a temple hanging as well as the fabric to adorn the idols of gods and goddesses.

Despite the challenges in finding buyers, the Chitara family says that it is taking all the steps to ensure that the art not only remains alive but also spreads, by trying to bring new artists into the art. The Chitaras say that they organise workshops regularly for those interested in learning the art and often they also get college students who come to them to learn all the techniques of Mata ni Pachedi. But they say that they need support to make the conservation effort more broadbased. 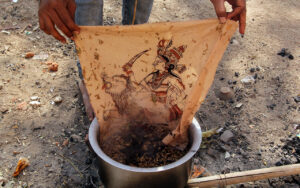 Then washed fabric is boiled in water, adding Dhawda flowers and alizarin solution to bring out the colours and to fix the dyes (Photo: Om Chitara)

“Mata ni Pachedi indeed deserves preservation as there are only a handful of artists now. That is the main reason we participate in workshops to expand the artist base all over the country,” says Om Chitara.

The elder Chitara says that he is optimistic about the art and its future as the boom of social media as well as e-commerce and digital media have opened up new platforms for them to advertise the art and find buyers as well as potential artists far beyond Gujarat.

“To make the art it takes several months and selling it off was even more difficult task for us a few decades ago. Our names were registered in the artisan list and we would usually receive letters from art department for art exhibitions and sale, and we used to travel a lot to sell our art. But now the digital boom has completely changed the whole process and given a new way to sell our products all over the country. It’s completely an easy task and more even people are now able to know about these kinds of traditional art,” says Kiran Chitara, beaming with optimism.