How James Bond has shaken and stirred brand business

007 and his chemistry with brands return with the 25th James Bond film No Time To Die. Here’s a breakdown of how marketers bond with the secret and suave agent

A Bond film is nothing without car chases, next-gen gadgets, smooth cocktails and dapper suits. Every prop used in a James Bond film is a product placement opportunity that brands have been cashing in on since the first film in the series starring Sean Connery hit theatres in 1962. 59 years, seven actors and 25 films later, the franchise is still knocking it out of the park when it comes to endorsements and brand deals. The 2021 installation ‘No Time to Die’ is no exception.

Slated to release on September 30, ‘No Time to Die’ starring Daniel Craig as Bond one last time has roped in close to 50 brands globally for product placements and collaborations. Heineken, Jaguar Land Rover, Omega, Triumph Bikes, DHL, Michael Kors, Smirnoff, Barton Perreira, Crockett & Jones, and Tom Ford are some of the many popular brands associated with the film.

Brands have not just been designing special collections for the film but also revisiting past connections with the franchise to strengthen their brand story.

A golden opportunity for marketers 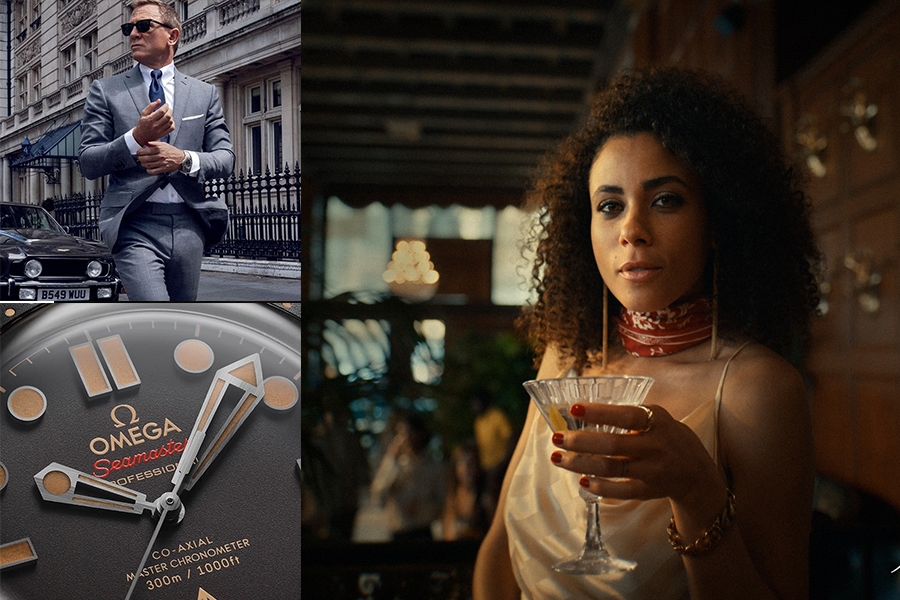 Ad campaigns by Omega and Smirnoff

Omega, for instance, launched a new limited edition of 7,007 pieces of the 42mm Seamaster Diver 300M when ‘No Time to Die’ was in the production stage. Omega has been a fixture on Bond’s wrist since Pierce Brosnan first sported a Seamaster Diver 300M in ‘Golden Eye’ in 1995.

In the 1964 film ‘Goldfinger’, the super-secret agent was seen asking for a ‘martini, shaken not stirred’. Nearly 60 years later, Smirnoff is raising a toast to the franchise with Smirnoff No. 21 featuring in the 25th Bond film. The brand has just launched its, ‘There’s a Spy in Everyone’ campaign to celebrate the release of the new Bond movie.

“To have Smirnoff No. 21 make its return in ‘No Time to Die’ as an official partner is a testament to the brand’s ability to thrive and grow,” says Sarah Shimmons, Smirnoff global marketing director in a statement.

Talking of special editions, it’s not just watches or martinis riding the Bond wave. Luxury motorcycle brand Triumph has also come up with a ‘No Time to Die’ special. In an official partnership with EON Productions, Triumph designed a limited edition of just 250 Scrambler 1200 Bond Edition bikes worldwide.

Bond becomes a testing bed, in a manner of speakingBrands are also initiating special campaigns around the film’s release. Aston Martin Cognizant Formula One Team has announced a collection of exclusive content across the Italian Grand Prix weekend where the team will replace the Aston Martin logos with the iconic 007 logo badge on the AMR21’s cockpit sides for a race. For Cognizant, the title sponsor of the Aston Martin Formula One Team, the association is a huge engagement opportunity.

“We entered into the Aston Martin Cognizant Formula One Team partnership because one of our strategic priorities for 2021 is increasing global brand awareness for Cognizant. Aston Martin was returning to Formula One racing after 60 years, and Cognizant was returning to its prominent role as the economic bellwether for the IT services industry. Fundamentally, we are transforming the Cognizant brand and creating opportunities to engage with clients in different forums. Formula One is an important part of that equation,” says Gaurav Chand, chief marketing officer (CMO), Cognizant.

The product placements for most brands go beyond the screen time of the film. Jaguar Land Rover, for instance, will be releasing behind-the-scenes content and interviews with the stunt team of the film to demonstrate the features of their new Defender used in the chase sequences of the Bond films.

For them, the James Bond film franchise offers a perfect platform for both parties. “Our role in ‘No Time to Die’ enables us not only to raise awareness of our products across the film’s global audience but also to provide a testing bed for us to push our vehicles to some of their most extreme limits. The James Bond films provide the perfect synergy with our brand values of British heritage, luxury, and sophistication,” a Jaguar Land Rover spokesperson tells Storyboard.