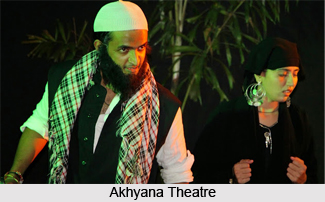 Akhyana was a folk musical theatre art form as well as medieval genre of Gujarati poetry, primarily prevalent in the western Indian state of Gujarat.

Etymology and Definition of Akhyana
The term ‘Akhyana’ is a Sanskrit word, literally meaning “to tell or narrate”. The 12th century polymath Hemchandra defined Akhyana in his work ‘Kavyanusashana’, as a side story from religious texts narrated by a ‘Granthika’ (professional story teller) to instruct audience, accompanied with singing and acting. This definition does not include the narration of other non-mythological stories like those of Narsinh Mehta. In general, Akhyana may be defined as the stories narrated by a story teller, for religious instructions to the audience accompanied by songs and acting. Dolarrai Mankad defined it as a form of poetry, with musical components and scope of acting.

History of Akhyana
Akhyana has been described as a form of poetry in the 12th century work of Hemchandra, ‘Kavyanusashana’. The 15th century poet Bhalan wrote large number of Akhyanas, including the popular one ‘Nalakhyan’ depicting the story of Nala-Damayanti. Nakar of 16th century was one of the few non-Brahmin authors. Bhoja Bhagat and Shamal Bhatt of 17th century wrote several Akhyanas. Veerji of the same period wrote ‘Balirajanu’ Akhyana, based on the story of Mahabali. Thus, the Akhyana art form had reached its peak during the 16th and 17th centuries. One of the most popular exponents of the art during the time was Premanand Bhatt. He wrote ‘Okhaharan’ based on the Aniruddha-Usha story. The trend continued to decline thereafter and became almost extinct by the 19th century. Later, some Gujarati poets of modern times like Balmukund Dave wrote Akhyana as genre of poetry, but the performance of Akhyana was never revived.

Stage Performance and Form of Akhyana
Akhyana is recited by the narrators or professional story tellers, who were called ‘Manabhatt’ or ‘Gagaria-bhatt’. They set poetry to musical tunes and did mono acting. They wore rings on their fingers that were used to sound the beats on overtuned copper pots. ‘Mana’ or ‘Gagar’ literally mean pot in Gujarati.

Akhyanas were recited by the Manabhatts who belonged to the Brahmin caste only. Thus, the Akhyana authored by the person of other castes were given to them for recitation. Nakar was one such non-Brahmin, belonging to the Bania caste, who was an author of medieval Gujarati literature.